It’s finally spring!  That time of year when you start wondering what your ancestors were planting!  No?  That’s just me?  Well, anyway, if you WERE curious, you’re in luck!

A number of Peter Henderson & Co. catalogs, like the one below, are available through Internet Archive.

These catalogs were advertised in newspapers across the country.  One could write away for a free copy or, for the low price of 50 cents, the company would throw in five “beautiful colored plates.”  This was likely an appealing option for the young housewife looking to spruce up her home.

For the family historian, seed catalogs can serve a multitude of purposes.  Want to know why great-grandpa planted timothy?  Check out page 79 of the 1875 catalog.  Timothy was also known as “herd grass.”  According to Peter Henderson & Co., it would “produce a larger crop” and “more nutriment” than other grasses planted for feeding farm animals.

Was someone a passionate gardener who prided herself on growing plants no one else in town had seen yet?  The newest varieties of flowers for the year are listed on page 5.

Perhaps you’ll use the illustrations to help identify those flowers by your family’s doorstep in the reunion photo.

Keep an open mind.  Any tiny detail might add value to your family history!

With a crash that could be heard for blocks, the old suspension bridge, which crosses the river near Maple Grove cemetery, fell into the river twenty-five feet below, Sunday evening at 5 o’clock. There were about thirty people on the bridge at the time of the accident, but only a few were seriously injured. That many were not killed is considered a miracle by all who saw the awful accident.

The accident was caused by the breaking of one of the large cables which support the bridge super-structure. When the largest number of people were in the center of the bridge the strain on the cables became too great and the one on the east side of the bridge snapped about thirty feet from the south end of the bridge.

In falling the bridge turned completely over, throwing the unfortunates upon the rocks below. The river at this point is unspeakably filthy owing to the large sewer which empties into it about a quarter of a mile above the scene of the accident. It was with the greatest difficulty that some of the people, and especially the injured, were extricated from the slime and filth. Fears were entertained that many would be drowned before the work of rescuing was completed, although the river at this point is very shallow.

At the time of the accident there were on the bridge several women whose cries for help, while floundering around in the water below, were heart rending. With all possible haste they were taken from the water and removed from the scene of the accident.

The report that the bridge had given way spread rapidly over the city and in half an hour the streets at this place were crowded for hundreds of feet around. So anxious were the spectators to lend a helping hand or even to catch a glimpse of the fallen bridge that it was with the greatest difficulty that many were kept from being thrown over the steep embankment into the river, twenty five feet below.

The most seriously injured was Hilda Outfelt, an employe of the glove factory and residing o Putnam street, and George Davis, residing in Marion township, a son of Isaac Davis, of this city.

Miss Outfelt was carried into the home of J. E. Thomas, where medical aid was administered. It was at first thought that her back had been broken, but it was later determined that her back was severely sprained. In addition to this Miss Outfelt received a sprained knee and a badly bruised hip. She was removed to her home several hours later but was suffering intense pain.

Mr. Davis, who was near the south end of the bridge, hung on to the broken cable and was pulled beneath the wreckage as it turned over, being crushed beneath the flooring and a large stone on the bottom of the river. He received an internal injury and it was with the greatest difficulty that he was able to breathe. Mr. Davis also received many minor cuts and bruises and when taken to the home of his father, on Center street, he was in a very faint condition.

Mr. N. Deprez, the extent of whose injuries could not be learned. But it is reported that she is quite seriously injured.

Among the number slightly injured were:

Glenn Hardy, a twelve year old boy living on Shinkle street, who received numerous bruises and cuts about his limbs.

H D LaFever, an employe of the L. E. & W., who received a sprained leg besides several cuts on his head.

Will Young, a glass worker, who was bruised and scratched on a rock in the bed of the river.

A man named Goodman who had his right ear torn loose.

There were many others who received cuts and bruises too numerous to mention.

The people were returning from the west side ball park and but a few moments before it is reported that a much larger crowd was on the bridge than at the time when it went down.

This bridge has spanned the river for over twenty years, having been repaired but two weeks ago. Authorities state that it is their opinion that the bridge will not be rebuilt.

A very amusing incident occurred on the scene of the accident. A young lad whose name could not be learned, was caught beneath the wreckage near the south side of the river. The debris was quickly removed and a lifeless body was expected to be found. But instead the lad arose and began looking around in a bewildered manner. When asked if he was not hurt, he replied, “No, but darn it, look at my clothes.” This was a very fortunate escape from death, although it did not appear thus to the boy.

Below is a photo of Lucia Arras’s second grade class at Lincoln School in Findlay, Ohio.  It was taken in early spring, 1931.

Lucia is visible just over her teacher’s shoulder in the light-colored dress.

The boys are wearing the typical outfit of the day: dress shirt, sweater and tie, knickerbockers and long woolen socks.  It wasn’t until they were older that most boys would graduate to long pants.

Of particular interest are the shoes worn by two young men in the front row:

Look familiar?  They’re early Converse athletic shoes!  Within the next year or so, the Chuck Taylor name was added to the badge visible on the inner ankle.

Several other children in Lucia’s class are recognizable when compared with her 6th grade photo. 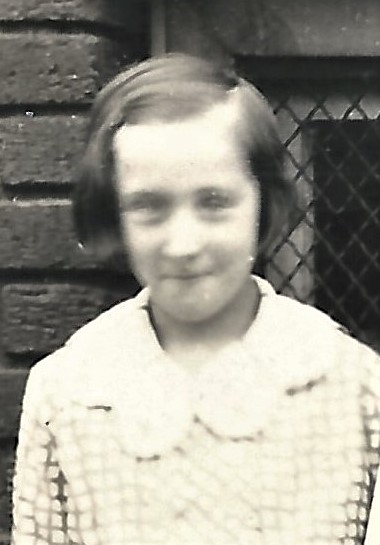 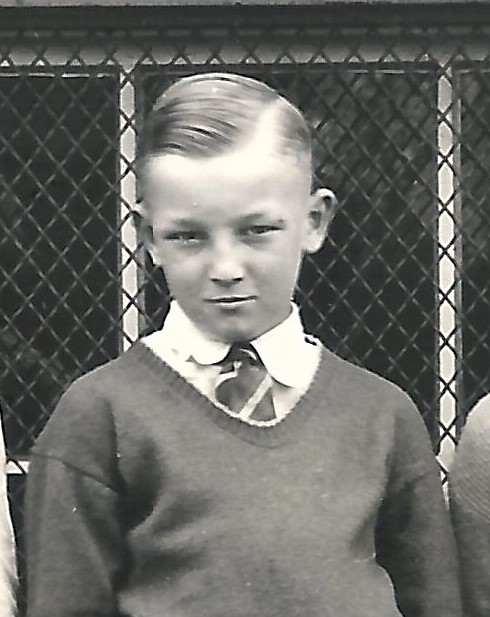 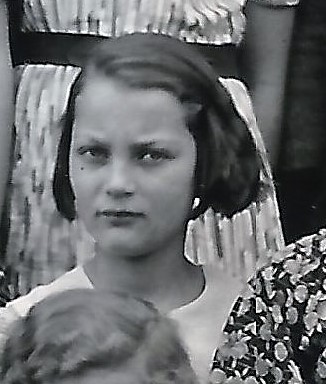 Oddly, when the Arras family sold their home on Joy Avenue to move to 519 W. Lincoln, it was the Saller family that moved in!  Lucia always remembered the neighbors there at Joy Avenue, George and Minnie Gayer, with great fondness.  It was they who gave her her first (and only) doll.

On March 15th, 1933, Stanley and his two young co-conspirators were turned over to federal agents1 who transported them the roughly 50 miles from Findlay to Toledo.  The very next day2, they were taken to the federal courthouse, located at 1716 Spielbusch Avenue.

The building was constructed just a year prior to Stanley’s arrival there.  In 2007, it was dedicated as the James M. Ashley and Thomas W. L. Ashley United States Courthouse.  During the Civil War, James Ashley was the first member of Congress to call for a constitutional amendment outlawing slavery; he authored the forerunner of the Thirteenth Amendment.  His great-grandson, Thomas W. L. Ashley, served thirteen terms in Congress.3

Surprisingly, given the building’s large size, it was built to house a single district judge.  A $104 million construction project, planned to begin in January 2018, will update the existing building as well as create a large annex more suitable for current needs4.  The only dedicated courtroom, built in 1932, can be seen below:

The three men were taken before U.S. Commissioner John C. Budd.  All three pled guilty to charges of violating the Dyer Act (i.e., transporting stolen vehicles across state lines).  Each was held on $1000 bond pending a hearing before the grand jury6.

At the time, Commissioner Budd had been serving in this role for nearly six years.  Born in 1891 in Perrysburg, Ohio, John C. Budd was one of fourteen children born to a German father.  He grew up helping on his parents’ farm and it was in this manner, hiring himself out as a farm laborer in his neighborhood, that he earned the money to put himself through business school.

After graduating from law school at Toledo University, Budd spent nine years working as the private secretary to federal judge John M. Killits (pictured below), who would later appoint him to the position of U.S. Commissioner.7

In 1933, Commissioner Budd’s office was located in the Produce Exchange Building8 at the corner of Madison Avenue and North St Clair Street, just over half a mile from the federal courthouse. 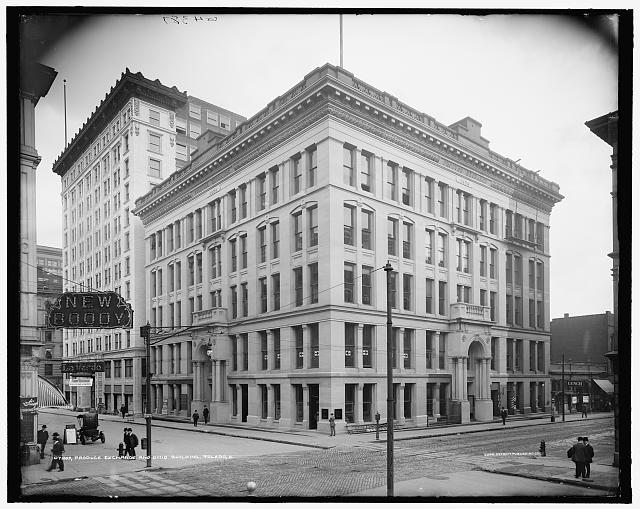 The building was demolished in 1984 and has been replaced by a parking lot, across the street from the present-day PNC tower.

As much as I’d like to give them the benefit of the doubt, it seems unlikely that certain portions of the family were oblivious of Stanley’s actions leading up to his arrest for violations of the Dyer Act.

The barn on Park Street that Stanley and his cohorts used to store and work on their stolen vehicles was most likely on the property of his wife’s parents, the Foremans.  How else would the police have known to look there first?  The lot was not a particularly large one as the Foremans lived in town.

I’ve never removed and replaced a car’s engine before, but I would guess it is neither a quiet nor a clean job.  It is hard to imagine that no one in the family ever heard metallic clanging from the barn or saw people move cars and car parts in and out.

My own great-grandparents, Oliver Arras and Clara Viola Smith, also likely suspected that something was going on.  Suddenly, during the Great Depression, two of their college-aged sons had cars of their own.  From the stories told within the family, money was tight enough that meat was not often on the table during this time period.  A lot of our favorite family recipes–noodles and mashed potatoes, potato soup with rivels–have their source in the Arrases’ lean times.  My grandma would not eat milk gravy as an adult because her family had had to rely on it so many times when she was a child.

Even today, when these financial considerations don’t apply, I cannot imagine my children suddenly appearing with cars of their own.  I’d probably worry that they were selling drugs.

Perhaps, then, the question is not, “Did the family know?”, but “Why did they stay quiet?”

Maybe the money that Stanley and his nephew brought in was helping to support their families.  Both families had young children at home.

Perhaps they just couldn’t bring themselves to report their own relatives to the police.

What do you think?

People on My Blog